When I first started at Kent, I had intended to do a little video tour of my room - for those who might not get a chance to see it while I lived there. I was going to do it during fresher's week, but I hadn't really done much to make the room my own. I thought I'd wait til I had some posters up, then do it.

Then, like any student, I was a bit lax when it came to keeping it tidy. I resolved to do it when I had actually cleared up my room.

I then cleaned my room, but kept forgetting about it.

Suddenly, what do you know, 9 months go by, and I was moving out. All I have are these photos of how the room was when it was empty: 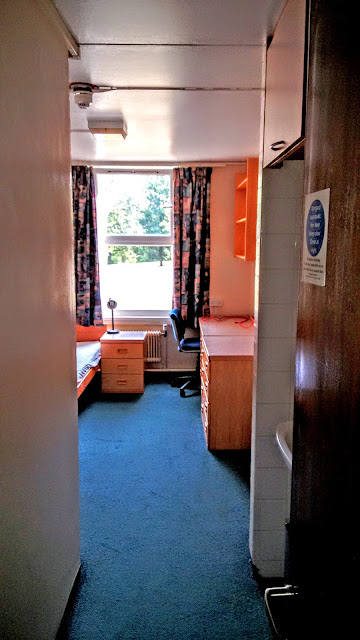 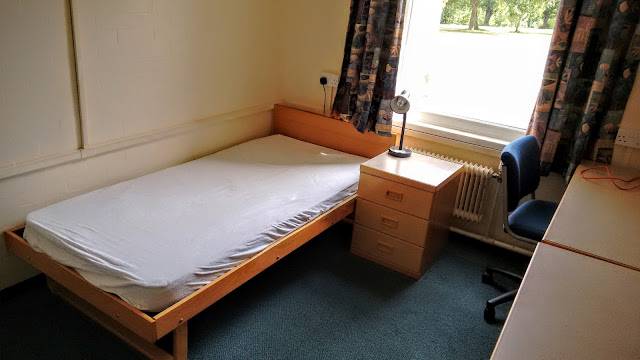 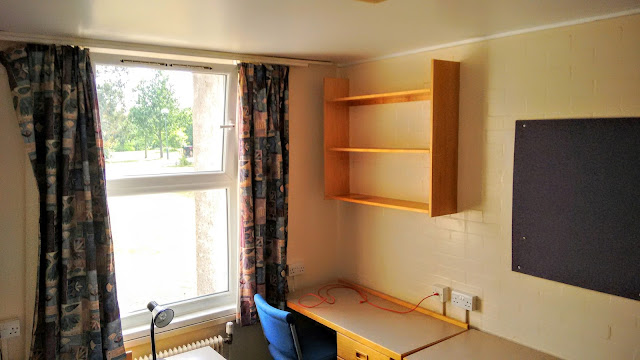 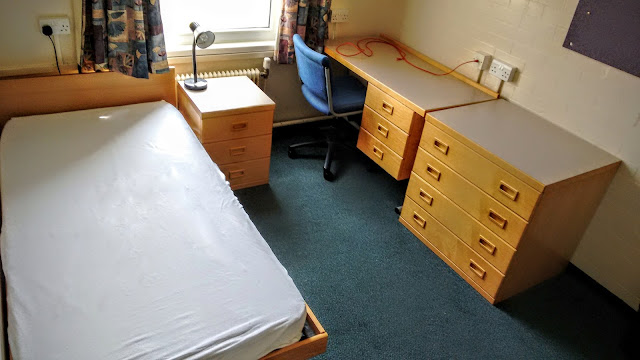 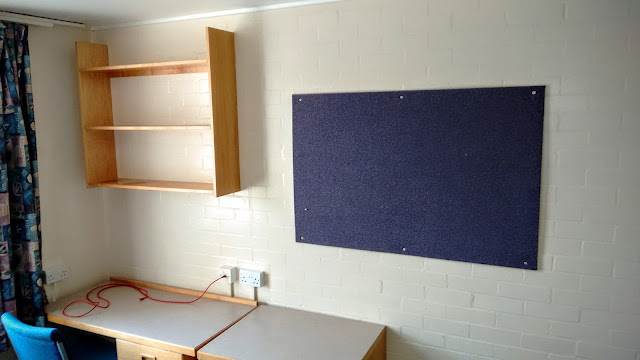 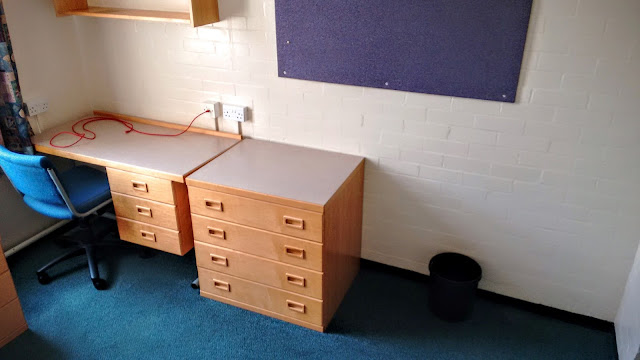 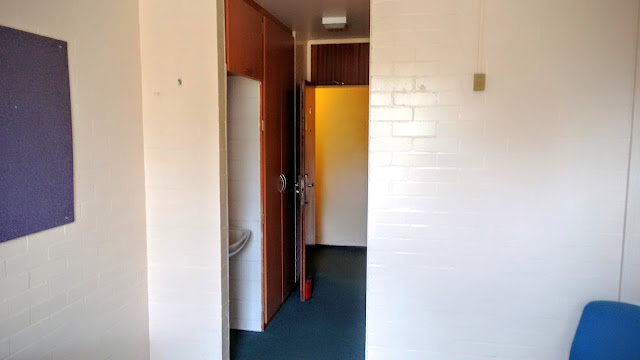 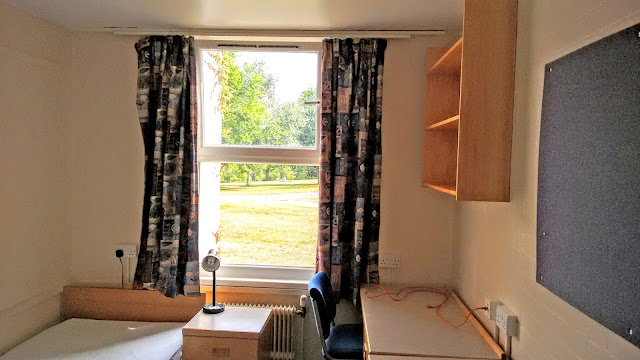 This is how I left the room, as its inhabitant in the University's 50th year, ready for a fresher to arrive in September, and start their own journey.

I don't really have any photos of the room as it was with all my things in it, but like the blog post linked above, I can describe it.

The back wall above the bed had two posters: one large Doctor Who one featuring the TARDIS on Gallifrey... 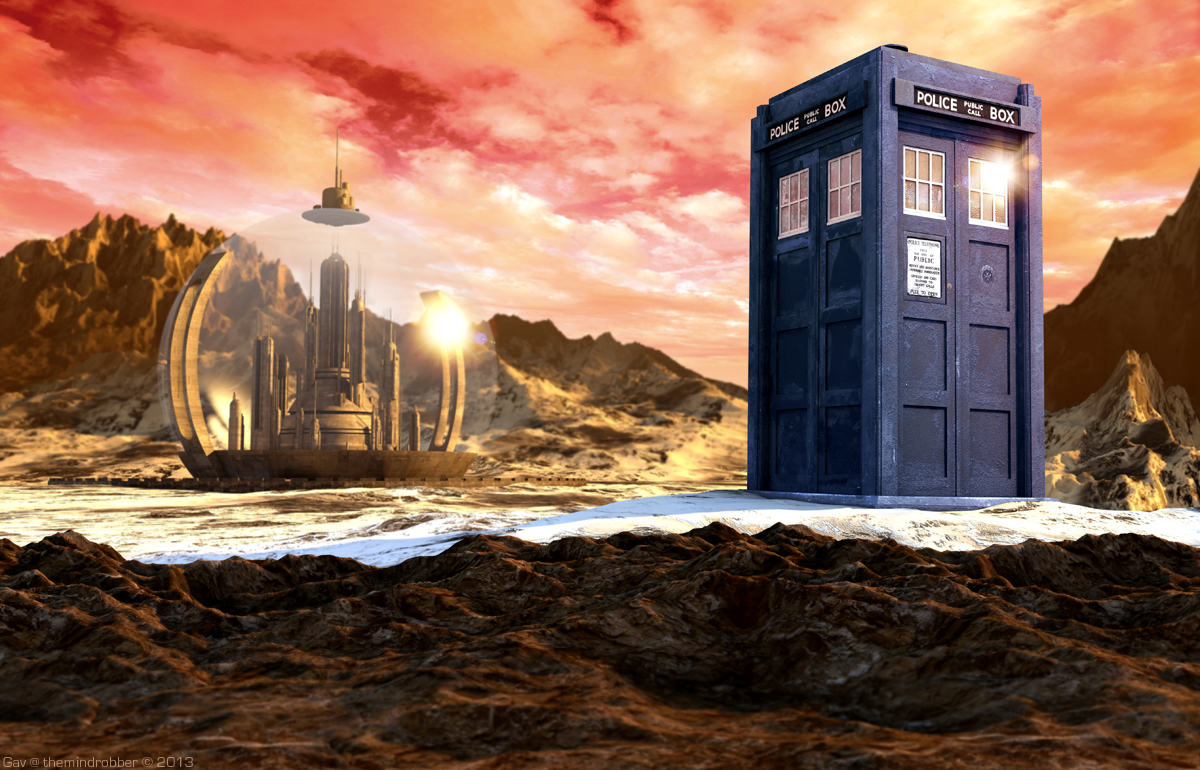 The other, a little more sentimental: this poster, which I designed, from 'A Penny For Your Thoughts' - the Year 13 BTEC Drama production I did at Ashcroft: 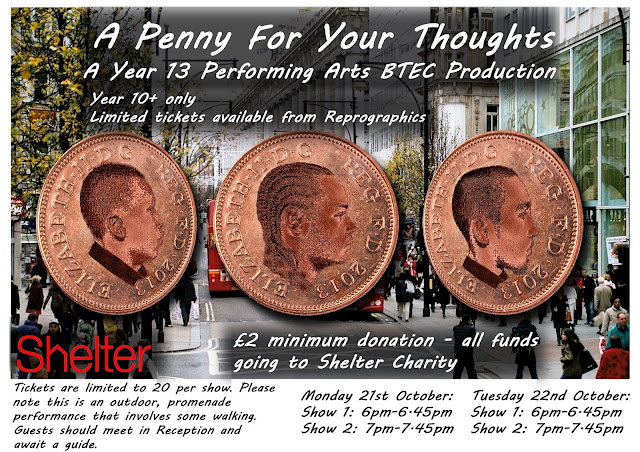 And finally, on the wall opposite the bed was a poster prominently featuring Peter Capaldi as The Doctor, with smaller pictures of  each of his 12 predecessors:

The chair below this poster was covered with a lovely fluffy blanket that was given to me by Janice, Paul, Marteli and Eliza the previous Christmas. On the back of the chair was often Matt The Wab: 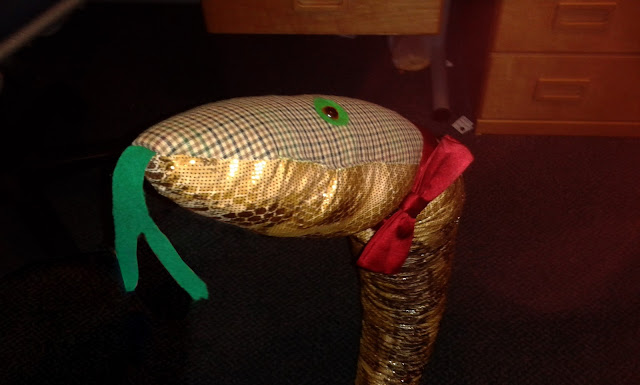 The notice board had a certificate for Matt, and a letter from my Great Uncle Tony - praising my own letter-writing ability. A source of great pride for me!

My desk had my laptop, and a small digital photo frame which I occasionally switched on when I missed home. Lots of photos from my days at Ashcroft and hanging out at home, many of which can be seen elsewhere on this blog.
The rest of the desk was largely cluttered with various bits and pieces - papers, folders, a fruit bowl that I frequently filled (yes, really!)

My shelves above my desk had various books. Some relating to my course: The Empty Space by Peter Brook. Getting The Joke and Britain Had Talent by Oliver Double (one of the lecturers here at Kent.) Lots of non-curriculum books that I've still not got around to reading properly - Caitlin Moran's Moranthology, Charlie Higson's The Fallen, plenty of Doctor Who books, fictional and factual. At the start of the year I had a jar of peanut-flavoured pretzel nuggets (look them up) and later on in the year I had this prize for one of the articles I wrote for InQuire, the student newspaper:

The shelf below: I'd keep a cereal box or porridge, along with a box of teabags, and then on the other side, various DVDs. Lots of Doctor Who again, but also a few favourite films of mine: Chaplin's The Great Dictator, Peter Morgan's The Deal, The Queen, and The Special Relationship.
Tony Benn: Will and Testament. The Elephant Man, Richard Pryor Live....all sorts.


The very top shelf had two more Doctor Who things, but with some sentimental value attached: models of the TARDIS and a Dalek respectively, originally given to me (on a cake!) by Luciano and his family for my 17th birthday (pictured here): 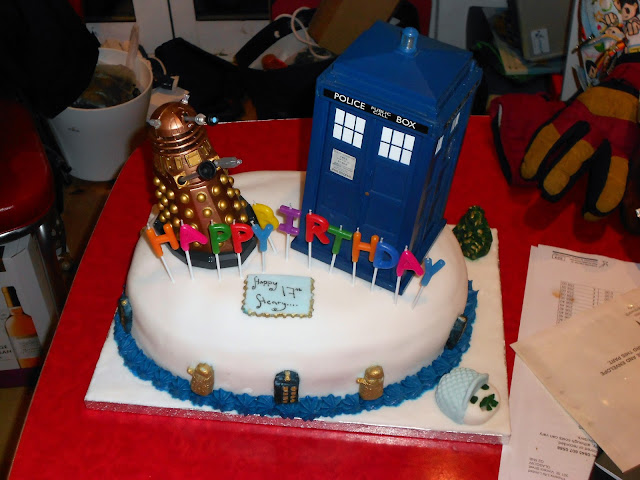 But really, there's more to the room than those personal touches from the past.

There's the memories made while there too.

Sitting there chatting to Stu on the first day. Talking to Navreet on the first night of fresher's because we both lived in Eliot and didn't fancy queuing for ages to get into Venue having already done the campus bar crawl.
Sitting in there chatting to Gemma and Stu. Having Ciaran over each week to watch Doctor Who in the autumn.

Skype calling Uncle Gordon in Australia. Video calls with Becky, Mÿca & Nicole or Kai, Yasmin, Luciano, Mum & Dad and whoever might be visiting who I otherwise wouldn't be able to see because of being away.

Hannah, Rosie and the rest of the #MakeItMcintosh campaign team coming round, and housing the props for the video in my room so that they didn't have to lug them around campus.

Recording a 'Happy Birthday' video for my friend Charlotte Campbell.

Dave, Beth, Stu, Gemma and co. hanging around before and after Monkeyshine on a Thursday.

Philippa and Edward joining us to watch silly videos on YouTube til the small hours of the morning.

Watching the Tony Benn film with Rob and laughing at the great man's one-liners.

Watching Wallace & Gromit's The Wrong Trousers for the first time in years with Edward and Ciaran, and getting teary eyed out of nostalgia and realising quite how sad the moments with Gromit in the kennel were.

So many of these are just tiny things. Little moments. But many of them are small, intimate moments of friendship and enjoyment that I will cherish as highlights of my first year.

There are obviously many, many others from my first year at Kent, but they could've happened regardless of where I was living. But these moments were specific to that room.

Eliot may not be much - in fact my friend Alex has some less than generous things to say about the building itself - but for me personally, it was enough.

And despite having a nice, more communal student house (with a proper kitchen!) to live in next year, then I'll miss it.

So long, Eliot College. You were a maze (literally), but for 9 months, you were my home.
Posted by Henry Mendoza (VortiGan) at 14:35